Sometimes, it seems like bureaucracy exists for the sole purpose of creating rules and making you jump through hoops. If you’ve ever tried to get approval to make any improvements to your home or business, you know that there can be a lot of runaround trying to get permits. Sometimes, even simple projects seem to require permits for no logical reason at all. 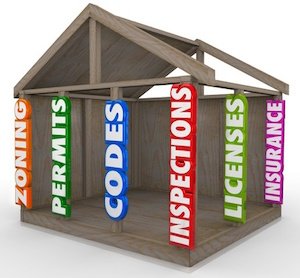 that they thought were silly and over the top. This roundup is from BuildZoom.com:

Homeowners and contractors also tell stories about jumping through hoops to avoid having to pull permits. One contractor was told that he could repaint a bathroom or replace the vanity without a permit. But if he did both at the same time, that would trigger the need for a permit. Another person revealed the importance of language in determining if a permit was required. If she described replacing her broken commode with a new one as “repair”, it was permit-free. But if she described the project as “installing a new toilet”, she would be faced with paying for a permit. In some locations, any remodeling over $500 requires a permit. And that’s just talking about permits from the city or county. Throw in approval from an HOA and the rules get even more difficult to navigate.

So, When Do You Need a Permit…and Why?

There’s no simple answer to that question. You can find a list that serves as a starting place over at Spruce.com. But the only real answer is to contact whoever is in charge of issuing permits in your municipality and ask.

Of course, for all this complaining, there are good reasons for getting building permits.

Let Us Take on the Headache of Pulling Permits

Here at Peak Steel, we are happy to navigate the complexities of permitting for you and ensure that your project is compliant with local codes. That gives you peace of mind and helps the project move forward faster. Naturally, the amount of time this takes varies from one location to another. So, the best way to ensure a speedy completion is to get started now! Contact our team to learn more.

Get a Free Estimate!

Here is a progress note. We are 99% finished. Ross has repeatedly pointed out the improvements of this building over previous buildings he has worked on. It is looking good. Electricity is going in today. Thank you for a high quality product. Read more . . .

My experience with Peak Steel Buildings has been nothing but positive. Will has always been very knowledgeable and available at all times to answer questions – even after business hours. Thank you for your personal service to make sure my project was on time and on budget. Read more . . .

We’ve known Will George with Peak Steel for quite some time now and he has never disappointed. He always responds to emails and phone calls quickly and gets our quotes to us in a timely manner. Will not only gives us reliable service but competitive prices. If you are looking for someone to handle your metal building needs our suggestion is Peak Steel. Read more . . .

We have dealt with other companies in the past, but none have matched the service we receive from Peak Steel Buildings. I have had competitive quotes on a variety of projects both simple and complex, and have had excellent service both before and after the sale. They will be our supplier of metal buildings and components in the future. Read more . . .

Oh my goodness it’s awesome. As a contractor/customer with Peak Steel Buildings it has been a pleasure. Wonderful crew and wonderful product always just like it should be. Read more . . .